The mission of the Saola Foundation is to help save Saola in the wild, and to conserve other threatened wildlife in the forests of the Annamite Mountains.

Several years ago, while attending the annual Wildlife Conservation Network Expo in San Francisco, we met Bill Robichaud, then a member of the Saola Work Group, which operates in the Annamite Mountain Range that runs through Laos and Vietnam. We had never heard of the Saola and learned that this stately animal, which looks like a very large Antilope and is called by some ‘the last Unicorn’, was close to extinction and that the Work Group, in conjunction with Laotian and Vietnamese support, endeavored to capture Saolas for conservation breeding because the remaining number of wild Saolas is thought to be in the low hundreds at most. After becoming aware of the plight of the Saola and seeing one of the few existing photographs of this magnificent animal, we decided to get involved. During the Vietnam War the Annamite Mountain region was relentlessly bombed because the Ho Chi Min Trail ran through it. No one knows how much wildlife perished as a result but it’s safe to assume the loss was substantial and we simply felt compelled to lend a hand to the Working Group’s efforts. This year Bill Robichaud, in partnership with others, launched the aforementioned ‘Saola Foundation’ in the US, in order to raise awareness and funding for the endangered Saola and save it from extinction. We encourage you to visit the Saola Foundation website and learn more about its mission and, if you’re able, send a few dollars their way. JK & JMK 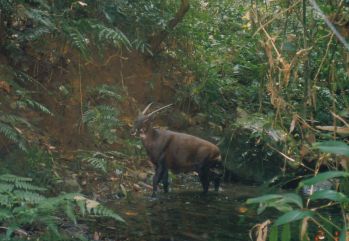 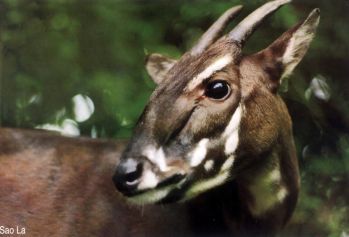